Ski for a Cure 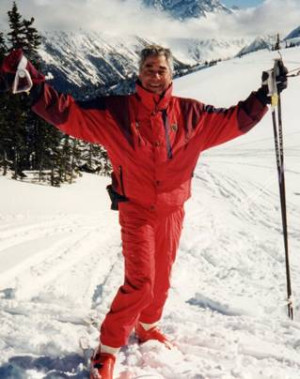 On July 28th 1999, Rob Lutterman lost his battle with pancreatic cancer; he was 63. Later, his family and a group of special friends decided to create an annual ski day to celebrate life, to raise money for cancer research and, most importantly, to commemorate Rob, who was an avid skier. The Rob Lutterman Memorial Fund at the Cancer Research Society was created to promote and fund research into pancreatic cancer, the first fund of its kind at the Society to support this type of cancer.

Whether you are joining us for the ski day or not, your contribution is doubly important: For every gift received through the Rob Lutterman - Ski for a Cure event, the Cancer Research Society will match the funds for this important cause.

Help us reach our financial objective of $60,000, which would allow a new research grant to be awarded in 2017. With the continuous support of donors, the hope for a cure is possible.

Since 2000, the funding of promising research, as well as future pioneering work in the field, is made possible through the Ski for a Cure event and donations received throughout the year.

YOUR GIFT IN ACTION

The Rob Lutterman Memorial Fund has so far contributed $1.2 million to strategic pancreatic cancer research. The first grant of $300,000 went to researcher Dr. Norman Kneteman at the University of Alberta. A second grant for the same amount was awarded in 2010 to researcher Dr. Michel L. Tremblay from McGill University in Montreal and his team. Since then, 4 other researchers were awarded a grant in 2013-2014: Dr. Nathalie Coburn from the Sunnybrook Odette Cancer Center, Dr. Ralph Da Costa from the Princess Margaret Cancer Center and the Lesly Dan Faculty of Pharmacy (University of Toronto), Dr. Raymond Reilly from the University of Toronto and finally, Dr. Christopher Pin from Western University.